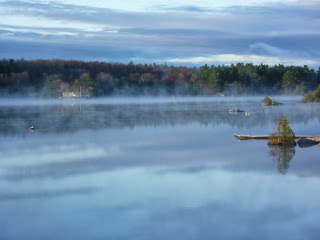 How mysterious, how fragile is the voice of the artist . . . we ponder the vast, misty place it dwells, and feel overwhelmed with gratitude and fear when it emerges from the depths.  Our own depths are intensely personal and ruthlessly guarded.  And then you meet Pat Schneider, founder of Amherst Writers and Artists.

I attended the Pat Schneider Retreat held by Inkslingers this month in beautiful Buckhorn.  The WestWind Inn hosted the event, and the image above was taken by me one frosty morning just after snow.  Yes, snow in October.  Emerging from sleep, arriving for a writer's breakfast, ready to face another day of myself, reaching in, reaching out.

This image closely represents for me the experience of working in a Pat Schneider writing circle.  You start out all sleepy and misty, wondering if you can write anything at all.  The depths feel murky, the horizon distant, and there are all these reflections and indefinite shapes waiting to trick your vision.  Then you pause, and breathe, and draw in the reflections.  You notice the shimmering of the water, the variances of colour, the tiny details, become intensely interested in what's hiding, what's happening, what just happened, even what did not happen.  And then you write.

It's affirming, it's exhausting, and it's some of the best writing you will ever do.

Pat Schneider and the AWA 'Method' is about voice.  Not just finding it, but living it.  Growing first voice, like a fledgling that must become strong to survive.  And in the writing world, where there are so many to tell you what will not work, what is not good, what will fail to sell, what is not good form, good manners, right trend, your voice is going to need to be iron willed.

And that's an important word, will.  Will you 'succeed'?  What will you write, who will you be when your voice grows up?  Will you muster the will to write, perfect and share?  These are the questions and also the answer.  You will.  I will.  The simplest message has a voice.

Trust your voice, a writer will hear, over and over.  But first, you must learn what that voice is.  And a voice will only emerge when it does not fear censorship.  How can you perfect what has not yet been expressed?  With Pat, you express, you feel, you express.  You are given feedback on what resonates so you can hear your voice and strengthen it.  Once you recognize that, you can trust it and defend it out in the world.

Then others will recognize it too.  They will see your emotion, your beliefs, your respect for others and for the written word in every sentence you release to the world.  That grows your voice even more; it grows your ability and willingness to write; and it protects you from the critical eye that, once you are open to it, will improve your work and strengthen your voice.

Will, Trust, Recognition.  That's what Pat teaches.  I feel extremely lucky to know her, and thankful to Sue Reynolds at Inkslingers, who brought her into our lives.  The writers in our circle shared many deeply held moments and secrets over the course of that week, touching pieces of our lives we did not know we had the skill and courage to share.  We came there good writers and left better writers, and more than that, we left with the will to write, the trust that we can write, and the recognition of why we write that becomes innate, and shelters us in this challenging pursuit of the writer: to be heard.

My Life as a House 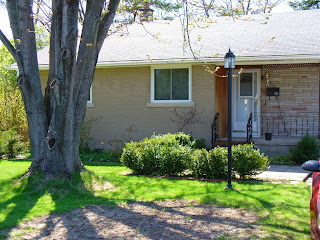 I loved the concept of 'my life as a house'.  The movie of that name was poignant and surprisingly satisfying given the odd title and the Hollywood line-up. It didn't get great reviews, but it touched something in me, perhaps because when I finally watched it, my dad was dying.

Alice Munro's recent Nobel for Literature made my writer's heart soar.  How wonderful that this venerable Canadian author has been so recognized on a world scale.  Sarah Selecky, the accomplished Canadian short story artist and blogger, recently stated that she believes there is a true renaissance happening in the Canadian Short Story, and this certainly supports that vision.


Munro was quoted as saying that a short story is not a linear art form, but she likens it to a house that you revisit, each time seeing a new aspect of that house and slowly piecing together what it means.


Words to live by, and isn't a short story, or any story, a metaphor for life?  So, 'my life as a house' resonates for the writer, and for the reader, who 'visits' our stories for a look into our house, a perspective on the everyday things that make us human, emotional, real.
Long live the art of short story!  And all stories, as they glimpse the power of emotion, the character that moves us, the new, the odd, the familiar.

There have been a lot of house references in my life lately.  My Mom's house has needed extended tending since my dad's death, including the cutting down of a massive maple in the front yard that my dad planted when my brother married in 1978.  It was a sad day to see that tree go, but I remember sitting on the front porch of my parents' house, the home I grew up in, only weeks before my dad died. It was my birthday, and Dad looked up at the huge tree and said, "It has to come down.  I shouldn't have planted it there, but I love that tree."  And I promised we would take care of it. After.  So it would be there for him to look at until the end.

So the tree came down this past August, and when the workers came to take it down, they looked over the extensive property and informed us that there were 15 Ash trees that would have to be treated before the Empire Beetle got them, an expensive process.  There was considerable debate amongst my siblings and my mom, but something inside me said that we had to save those trees.  At least some of them.  Because they grew there in 1956 when my parents bought that property in Kingston and put a house on it.  Our house.

So save the trees we did.  And I wrote a poem about it called, "The Maple and the Ash" which I will read at the next Words of the Season event for WCDR, along with my recent award-winning poem (Shortlist, Montreal Poetry Prize) "The Wedding Service".

Some things are meant to live beyond us, and some things, like the house we grew up in, lived and worked and laughed and cried in, deserve a loving return of the TLC and shelter they once gave us.  And that's worth writing about.

What's in a Name 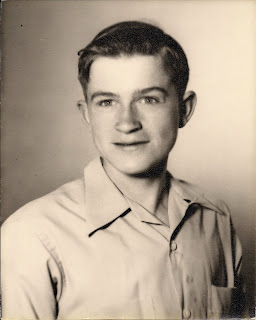 Gordon Melville Clayton was my uncle, a close companion to my family while we were growing up, and a great friend.  He passed away this week at the age of 73 due to complications with cancer.  Named after his father, who passed away when I was quite young, he always went by the name Mel.

Uncle Mel was a rare individual who took great joy from life.  Freedom was his favourite pursuit.  As a child, my mother told me, he could not sit still, and longed always to be outside.  As soon as he was old enough to see over the steering wheel, he took to driving and would 'run the roads' until he ran out of gas.  All his life he kept up his passion for going places, and drove his van over country and city roads long after he could no longer walk without a walker.

As a child, I remember the constant presence of this uncle in our family life.  Every Christmas, every Easter, every birthday, there was Mel at the door with my grandmother, gifts in hand and a big smile on his face.  He loved kids, loved to play with us, tease us, tell us jokes and take us everywhere.  Whenever my grandmother had a notion to go somewhere, Mel would drive us: Marineland in Niagara, Buffalo or Watertown for shopping, out to the country to visit family or friends on the farm.

Mel's favourite things: pie at the diner, doughnuts at Tim Hortons, laughing children, traditional country music, my Mom's corn fritters at Christmas Eve dinner, cars, horses, farms.  He had so many plaid flannel shirts in his closet that we had to take four bags and box full of them to goodwill when he went into terminal care.

My Dad and Mel were good friends, and Mel used to tag along with his older brother Donny and my dad, Richard.  That was before dad took notice of my mom, who was three years younger, with Mel three years younger than that.  I imagine them climbing into an old Ford Dad would have fixed up in the late '40's and running the roads of Kingston, meeting up with friends or just going for a drive.

In the hospital in the last weeks of Mel's life, a big white board in his room announced his name as 'Gordon'.  My Mom would go in to see him every other day, and remind the nurses over and over that all his life my uncle had gone by the name of Mel.  But the white board remained with the legal name, Gordon. And the nurses, who changed shifts daily, continued to call him that.

Whenever we went to see Mel at the hospital, however wan and gaunt he looked that day, he would sit up, give us a huge grin and say, "Hi," and rhyme off all our names.  His friends at the garage, from the farms where he used to help out, from the diner he frequented, all came to see him, and called us to see what could be done to help.  His two remaining brothers came to visit and called as well, and his nephew, who was working at the hospital where he was sent for palliative care, brought him his meals every day.  There was never a day when he was alone, and the nurses commented that they'd never seen such a cooperative and cheerful patient.

A few days before he died, I went to see Mel, along with my older brother, sister and my mom. It was obvious he was struggling.  He begged to be taken outside one last time.  The weather was freezing even though it was April, and there had been snow earlier that day, so the nurses refused, saying he could not possibly be taken out of the hospital.  Mel was disappointed, but he acquiesced and gave a shrug of his shoulders.  His days of running the roads were over.

As we said goodbye, I looked up at the white board with the black marker name Gordon Clayton scrawled across it.  Written underneath that were the words, "I like to be called 'Melville'."  I grinned at him and said, "We love you Mel."  And he grinned back.  And that was the last time I saw my uncle.  But at least the nurses had finally gotten his name right.  Or at least half right.

Because my uncle, with his sunny disposition and his willingness to help anybody, his love of the family and the simple things in life, could only be Mel.  He didn't suit the name Gordon, or Melville.  He was just plain Mel.  Everyone liked him that way.  That's the way he liked it.  And that's how I will always remember him.

Photo Gallery of my uncle