Plotter or Pantser: Ins and Outs of First Draft


A Writer’s Guide to the Nefarious Methods of Great Story

Plotting once meant to me the nefarious rubbing together of hands and a long thin mustache.  Pantsing sounded equally horrible, like something the neighbourhood toughs did to the gifted kids on the playground.  In more enlightened times, I discovered that writers divide themselves into these two categories.


Plotting still sounds rather evil to me, an implication of over-planning and pre-destiny that amounts to controlling the characters in your book until they are nothing more than a puppet at the mercy of plot.  An evil plot.  Pantsing, once I knew what it was, sounded much more like what I do as a writer, so I confidently put myself in that category: a crazy dreamer who has no idea where her stories come from. 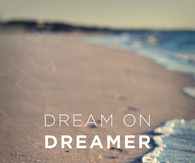 Except, it’s not that black and white, and what I do, I discovered, is not pure pantsism.  There are some writers who don’t know anything before they write.  They just write and eventually a character presents herself, someone challenges her, and maybe a bad storm and earthquake wreck havoc on all their plans—or not.  We’ll see.  They have no idea how it will end until it does.  Oh, the humanity!


I know several things before I write.  I know the ending.  Yes, that’s right, I am absolutely, 100 percent sure of the last few pages of the story.  I even write the last scene and rarely change a word.  So there is some element of plotting going on, plotting to bring my characters to the conclusion I intended when I decided to write this story.  I know the main character and the main antagonist and then I write the first scene, and just keep on and on until the character arrives at the conclusion.  And boy, have they been through hell in the process.


For me, the reason I write this way is because I have a reason for what I write, a point I want to make, a moral of the story.  I know that these two characters will end up making a huge sacrifice to be together, or that they will suffer the consequences of putting money before people, for instance.  I want to present an aspect of human nature or the world we live in and shed some light on what happens to people in these circumstances.  I have an opinion, and I want my readers to think about that.

Plotters like charts. They like to take the elements of their story and see it on a graph or a bulletin. or on pink and blue cards spread out over their office.  It’s a good way of organizing a story and documenting what each plot point does and how it serves the story. There are plenty of templates in books such as Robert McKee’s Story, and even software to help you do this from Dramatica to Scrivener. For the plotter, this is nirvana.

﻿﻿﻿﻿﻿
I appreciate, even admire this process.  Power to you, if you can do it well.  It will save you a ton of rewrites, especially if you are writing for genre or a more commercial audience, because readers and certainly editors of these books look for those markers, and you had better have them if you hope to find a publisher and then an audience.  Trying to fit them in later is possible, but much more difficult.


For a pantser, these charts and programs are frustrating, fascinating, helpful and infuriating.  How can you daydream from a chart?  How can a new character walk onto the page and take your story by the throat, running in a whole new and exciting direction, taking your protagonist with it?  Plotters will tell you that this is exactly what they are trying to avoid.  That if you’ve planned the story you want to tell, these nefarious characters will not be able to hijack your story and tie your protagonist to the railroad tracks, rendering him a victim and not a hero.

But wait a minute—who is writing this story anyway?  If your protagonist is strong enough, he will find a way to take the story back from this nefarious character, and what a ride that will be.  The element of surprise is a big part of what makes a story unique, and rivets readers to your page.  So it comes down to a key element of the true storyteller, plotter and pantser alike: however you arrive at your story, controlling or dreaming as you go along, the story structure has to be strong and equally unpredictable.


Your main character is the love of your life and she is the centre of this story.  Her actions drive the story and the rest is background.  If he starts out as a victim and does nothing about it, just takes the hits over and over, that’s not a story but a list of events.  So if you plan out your story with a great flood, and your intention is that your main protagonist is going to change her life and those around her, then it’s what she does when the flood arrives that makes the story.

If you can plot that out, you can start to see what you are trying to say, and build the story elements around that.  If your point is that meek people can overcome incredible odds because they care about others when things go horribly wrong, then planning out a setting that restricts your character at the beginning and showing how they chafe at that will set up the central conflict when the waters rise.  (For a riveting historical fiction against the backdrop of a flood, read Ann Weisgarber’s The Promise.)

For instance, let’s say our hero has been shifted from place to place, a spinster with no home, who is eventually put in a teaching position she does not want, but is given no choice.  So she makes the best of it and bonds with the children, endearing herself to the reader.  And then, little Bobby is beaten up in the school yard, and Miss Teach goes to see the bully’s father.  Only Mr. Bragg is proud of his son for defeating the weak and ensuring his place in his world.


Does Miss Teach go hide in a cupboard?  No.  She shows some backbone and ingenuity.  She may not be able to do anything about Mr. Bragg’s hold on the community, but she isn’t taking this lying down.  She risks her reputation and her position to stand up for little Bobby. It might be a small action, like finding someone to teach him to fight back, or giving him a chance at a scholarship so he can get out of this backward town, but she’s going to assert herself.  So when the flood comes, and her charges are in danger, we know she will rise above her natural timidity and sacrifice herself to save the children.  Where it goes from there is up to you and Miss Teach.


As a plotter, you might look at the first page, third page and thirtieth or fiftieth page, and determine the hook, the introduction of Miss Teach and what’s at stake for her (ie overcoming her timidity and the social circumstances that repress her), the inciting incident that brings her to the school, and the crack in the world that changes her new normal to crisis. 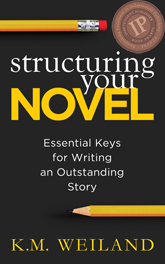 K.M. Weiland in her blog post “Your Book’s Inciting Event: It’s Not What You Think It Is” contends that there are actually three inciting incidents that take place in the first act, and five steps to achieving them.  Her First Act Timeline is outlined in the blog and in her book, Structuring Your Novel.


Driving plot through character is so crucial to a good story, because readers know how they might react to a crisis but they want a window into the soul of someone they care about, so they can empathize on how this person reacts and where that leads them—to heroism or tragedy.  If a writer relies too heavily on plot to drive the story, it will seem predictable and uninteresting, a series of events that don’t change the character.  If however, a writer relies only on what the character is feeling, and this does not change the character’s actions or the world around them, then the reader will lose empathy and want to get out of the character’s head.


Plotting and pantsing are both important writing techniques: one ensures pacing and the other surprise.  There is no recipe to ensure a writer will get this right, and each author will have to choose for themselves what works best for them.  In my sphere of creative writers, many of them WCDR (Writers’ Community of Durham Region) members or partners, about half are plotters and half pantsers, demonstrating that both methods can be effective.

But within those two groups, most use some combination of plotting and pantsing, however much they fall to one side.
Notorious pantser Stephen King stated in his book On Writing, “I won’t try to convince you that I’ve never plotted any more than I’d try to convince you I’ve never told a lie, but I do both as infrequently as possible.”


The main thing is that writing should feel good, whatever method you use to get it down.  I love first draft work because I can’t wait to see what happens next as my characters take over the world I created for them.  For plotters, I suspect the thrill of seeing their blueprint come to life is a driving factor.  Some writers, mostly plotters, hate first draft, but love the subsequent edits. 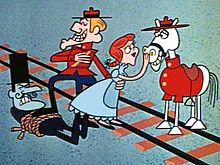 So is there a right or wrong way to tell a story?  Snidely Whiplash may try to harass and lasso the dreamers, but in the end, the hero always wins.  And so we know that whatever begins the tussle, the main character will come to the rescue.  And that’s what really makes a story work and a reader want more.
Posted by Sally A. Moore at 9:28 AM